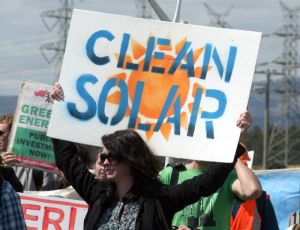 Most Victorians want more action on climate change and renewable energy from the Baillieu State Government according to a new public opinion survey commissioned by Environment Victoria.

The survey was conducted in late December 2011 and early January 2012 involving a series of questions to over 1000 people in Victoria conducted by Essential Media, a professional market survey company. The primary results show that 76 percent of Victorians expect the State Government to take action to reduce greenhouse pollution rather than leaving tackling climate change to the federal sphere of politics. There is also massive support for the implementation of renewable energy and energy efficiency programs, and just 22 per cent believe the 2km wind farm veto is fair.

Digging deeper into the results and you find many hard and soft Liberal and National Party voters want more action on climate change and clean energy. It is not just Greens or Labor voters that support clean energy action. Increasing renewable energy, energy efficiency programs, and reducing reliance on coal fired power have got very broad public support in Victoria, according to this poll. There is also a notable number of people who want native forests protected as part of dealing with climate change.

The Victorian Climate Change Act of 2010 which came into effect on 1st July 2011, was passed by the Brumby Labor Government with broad support of opposition coalition MPs at the time. The legislation set a goal of 20 per cent emissions reduction in Victoria (from 2000 baselevel) from renewable sources by 2020. A review of the legislation has been in process which has attracted over 300 submissions. The Baillieu Government is set to announce the results of the review in the coming week.

Environment Victoria CEO Kelly O’Shanassy said on Friday, “The polling shows overwhelming community demand for the State Government to reduce greenhouse pollution, with 76 percent of Victorians believing the state has a responsibility to act, while just 24 percent think that it should leave action to the Federal Government and the carbon price.”

“This is a clear message for Premier Baillieu ahead of his government’s release of the Review of the Climate Change Act, anticipated next week. Victorians expect their state government to act to reduce pollution.” said O’Shanassy.

For the question on sources of power the message was pretty clear that public opinion supports a transfer of energy generation from high pollution brown coal fired power to renewable sources such as solar and wind.

“Question: Currently Victoria gets over 90 per cent of its electricity from coal, which is highly polluting. Over the next five years, would you like to see more or less of the following? Coal‐fired power plants; Coal mining and export; Gas power plants; Renewable energy like solar and wind; Energy efficiency.”

There is currently a proposal for a new 600MW coal fired power station at Morwell in the La Trobe valley. The HRL coal gasification plant proposes to turn brown coal into a synthetic gas which is mixed with natural gas to fire steam turbines to generate electricity. The pollution generated will be the equivalent of a black coal fired powered station, around 4 million tonnes of CO2 pollution each and every year.

The Government also needs to take a hard look at its planning policies for wind farms which have been heavily criticised as being discriminatory and unfair.

“Question: The Baillieu Government has introduced a policy that requires wind farms to be located over 2km from any residence where the resident has not given their signed approval. No such policy exists for coal‐fired power plants. Do you think this is fair?”

“Victorians can see that the Baillieu Government’s anti-wind laws discriminate against wind power and risk billions of dollars investment and regional jobs. This Government should be concerned that just 27 percent of ‘Soft Liberal’ voters think that its anti-wind laws are fair while 42 percent say the laws are unfair.” Kelly O’Shanassy said.

Since Ted Baillieu’s government was elected, environment groups have criticised the Government for going backwards on state environment and climate issues and refusing to come clean on how to achieve 20 percent emissions cut by 2020, which they supported when in opposition.

Kelly O’Shanassy from Environment Victoria summed up the governments record: “Since coming to office the Baillieu Government has reduced support for solar and wind power and has questioned the need for the State’s pollution reduction target. The only bright spot has been the doubling of the Victorian energy efficiency target. This polling shows that continuing to ignore the community’s massive appetite for cleaning up our energy supply is politically dangerous for the Baillieu Government as well as gambling with Victoria’s future economic, social and environmental prosperity.”