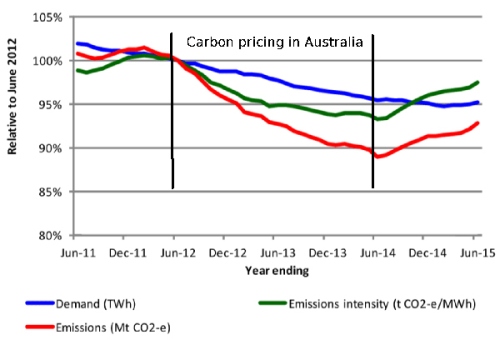 Australia’s carbon tax was in operation from July 2012 to June 2014. Two short years. It was effective in reducing Australia’s energy emissions, but it also added slightly to the residential supply cost of electricity, which people on low income were compensated for.

My electricity cost from the grid rose 35.76 per cent over the 5 year period from 2011 to 2015, despite a 12 per cent fall in my grid energy consumption. Most of the rise wasn’t due to the carbon tax. Details from my electricity account show that network charges rose 89.6 percent over the same period.

Being energy conscious, during 2011 I installed a 1.5kW Solar PV system which finally came online in November 2011. But I also pay a surchage to my energy retailer for grid supply of 100 per cent wind renewable energy. 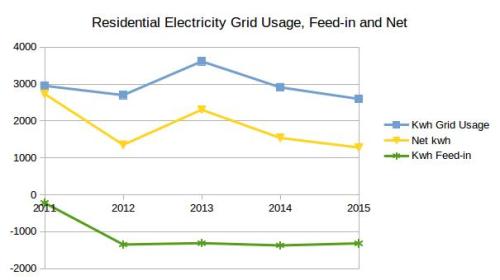 Here is the graph of my annual grid energy usage (blue line), solar feed-in (green Line) and the Net kWh (Yellow line). As you can see I had a spike in usage during 2013 over winter. Maybe I was using too much heating that year, or perhaps my daughter was leaving on too many lights, or maybe we were having lots of pajama parties. My average usage has since fallen in 2014 and 2015 through energy efficiency measures, including converting to LED downlights.

This next graph shows my residential electricity costs on an annual basis for 2011 to 2015. It clearly shows that my network costs have nearly doubled in 5 years. This is the so-called gold-plating of poles and wires that energy insiders talk about.

The redline shows network charges. This has risen by 89.6 percent between 2011 and 2015: almost doubling.

My total grid cost (the black line), which includes grid supply, wind surchage, and network charges, rose by 35.76 per cent over the 5 year period, despite a 12 per cent fall in my grid energy consumption over the period.

The Green line shows the surcharge for 100 per cent wind renewables. This charge has actually reduced by 33.63 per cent between 2011 and 2015. So this reduction actually hides a greater rise in my total grid costs.

My total Grid cost hasn’t gone down after the carbon tax was abolished despite my reduction in grid energy consumption by 12 per cent from 2011 levels.

But far over-riding the effect of the carbon tax were the increases in Network charges over the 5 years. The carbon tax was no more than a slight ripple by comparison, and compensation was paid to taxpayers for the impost.

Tony Abbott’s ‘Axe the Tax’ was nothing but a con. Carbon pricing was actually working driving emissions down in the energy sector, something that has reversed since the carbon tax has been abolished.

So here we face another election and Labor is taking a policy of an electricity ETS baseline and credit scheme to the polls. This is argued to have even less of a consumer price impact than the carbon price of 2012-2014.

Well they are wrong. And they were wrong last time as well.

The economist and former Liberal leader John Hewson told the Sydney Morning Herald that Turnbull’s response is “very damning, actually”. He says that if Turnbull were serious about innovation, jobs and growth he’d support some of Labor’s plan, not oppose it.

“Bill Shorten can run a new industry on these commitments with new jobs and a new industrial base for the country. Labor has taken a bit of a risk and gone out in front on this,” Hewson says, “and it’s being constructive and they are still pretty moderate in terms of the task ahead of Australia over the next 30 years.

“Labor’s carbon emissions target, I think, is realistic and it’s getting closer to where it should be if Australia is serious about its commitments to the Paris climate accord. It’s all right for Malcolm Turnbull to talk about innovation but to make it happen, it’s not just designing apps. This country has a poor record of commercialising new technology. You need a broad based movement,” says Hewson.

Labor’s electricity ETS has the capability to rapidly reduce emissions from the energy sector. “With a rapidly declining baseline, a baseline and credit scheme could play a role in an emergency transition to zero emissions as it does not include the use of dodgy offsets etc like an ETS.” said Climate Action Darebin activist Jane Morton.

The primary impact of rising electricity prices, at least on my electricity bill, are the network charges being added to our bills.

If you want to be angry about rising electricity, blame the Network companies increasing charges with little justification to the consumer. Or blame the regulatory agencies that failed their duty in administering the system effectively allowing the Network companies to rort the system. (SMH Feb 2015) But don’t forget to blame the politicians which set in place the regulatory environment and have failed to review it (The Monthly 2014).

One final point: The climate Institute shows us the real cost of the Liberal Party’s Emission Reduction Fund Scheme: more like $90 per tonne, and our emissions are actually rising.

Since introduction of Direct Action climate policy taxpayers have paid $90 per tonne for emissions to rise #auspol pic.twitter.com/DzTfdTPiWb

This entry was posted in news and tagged ausvotes, carbontax, electricity, ETS. Bookmark the permalink.