Wash up from the Coolaroo fire: class action and pollution of Merlynston Creek

On 13th July a mountain of fire erupted in bales of recycled plastics and paper at the SKM Recycling facility in Maffra Street, Coolaroo producing voluminous smoke and fumes. Sadly, the extensive water employed by the Fire Brigade to try and bring the fire under control made it’s way with contaminants into local waterways, primarily Merlynston Creek.

Even the Upfield train line was closed down for a time on July 14, with buses replacing trains from North Melbourne to Upfield.

The smoke plume and fumes spread over and affected residents and workers in a wide area including the suburbs of Meadow Heights, Dallas, Broadmeadows, Campbellfield, Coburg, Fawkner, Glenroy, Pascoe Value, Roxburgh Park, Strathmore and Westmeadows.

Residents were told to stay inside. Asthma sufferers were warned to take care and implement their asthma management plan.

At least Emergency Authorities acted quickly by setting up community support and health checks at the Broadmeadows Leisure Centre from 13-18 July. They had learned some lessons in response to the 2014 Morwell mine fire disaster.

130 firefighters from MFB and CFA attended the fire, with support from specialist crews from NSW, South Australia and the ACT.

SES Victoria in collaboration with the EPA set up three portable air monitoring stations at the Coolaroo Fire site at the direction of the Incident Controller on the 13th July. Some of this equipment, valued at $10,000, was stolen from behind the Coolaroo Pub on July 14. The monitoring equipment was removed on 21 July after the fire was brought under control and no further major smoke emissions were coming from the site.

Even two weeks after the fire started, some residents are still feeling the health impacts of the fire according to an ABC report.

Class action by residents and businesses affected by the fire

A class action writ (PDF) by Maddens lawyers has been filed for compensation by over 100 residents and small businesses affected by the fire.

This writ claims that fire was a foreseeable risk which SKM Industries recycling firm should have managed with an adequate fire management plan and fire suppressant system, but also failed in it’s duty of care in not processing highly flammable waste material or keep fuel loads at a minimum.

“There are many, many people who have been required to undergo a medical examination during the week,” he said. “Many have been referred off for chest x-rays. This [has] impacted on children in particular, also the elderly and even able-bodied adults. The respiratory effects of what they’ve been through is a very serious issue.”

“A once-off fire in some instances is probably less foreseeable, less predictable, less able to be managed. But when you have instances of repeated fires in a circumstance where a fire is a predictable hazard, I believe that seriously and significantly strengthens the case.”

“There were many people who spoke no English, who were left out of the loop and were not presented with the urgent information in their language at the time. They were to some extent, left on the periphery to fend for themselves.”

I had a friend with asthma in Fawkner whose breathing was directly affected and chose to spend a few days elsewhere away from the smoke plume.

Ironically, on the morning the fire started authorities including Hume Council and EPA had planned an inspection for 10am and to talk with SKM Recycling about reducing fire risks. The fire started at 8.45am that morning. There have been at least 3 other fires at the facility this year.

According to an ABC Melbourne tweet, EPA CEO Nial Finegan said they had no special powers over Coolaroo site, despite 3 fires in a year. “We are working with partners that have powers” he said.

Local state MP for Broadmeadows Frank McGuire was active in giving interviews about the Coolaroo fire and posted 4 news videos on his Vimeo account. The one below to ABC Breakfast:

This level of promotion is in stark contrast to Maguire who has been remarkably quiet about management of the toxic site in Fawkner, a legacy of Monsanto subsidiary NuFarm manufacturing dangerous pesticides, herbicides and agricultural chemicals up to 1974, which was only partially remediated in 1995, and is still generating great concern among local Fawkner residents.

SKM is one of Victoria’s largest recycling operators. An earlier fire in February destroyed some of it’s processing plant, so it was using the extensive area on site to store the materials pending processing. The Maffra street site receives waste and recycling materials from other transfer stations around Melbourne for processing in the main Materials Recovery Facility (MRF).

And the recycling waste from household bins just keeps coming.

It is clear we need these recycling facilities, to process all the paper, metals and plastics in consumer packaging that our municipal councils collect and even earn revenue from recycling. But we also need these facilities tightly regulated and managed to reduce fire risks and associated risks to population and environment health.

Poor Merlynston creek. Much of the waters used by the Metropolitan Fire Brigade to put out the Coolaroo fire in the recycling centre ended up in Merlynston Creek, along with a host of toxic chemical residues from the fire. Eventually these residues made there way to Coburg Lake and Merri Creek. I followed the path of Merlynston Creek from source to confluence earlier this year.

The EPA issued a pollution alert for the Merlynston Creek from the fire. Water used on the fire washed into the creek, which crosses underneath Maffra street slightly south of the SKM Recycling Plant.

The EPA alert warned that water used to bring the fire under control has caused fish to die at Jack Roper Reserve Lake.

Water samples found that there was “extremely low levels of dissolved oxygen that would not support aquatic life such as fish and insects.” Further, high levels of E. coli bacteria were also found. 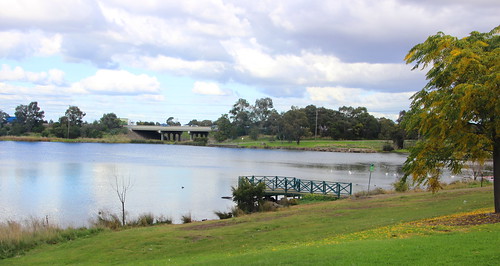 In response, Hume Council erected signs in the park warning people not to fish or go near the creek and prevent pets from visiting the creek. At least 33 dead fish were removed by Melbourne Water officers, and the EPA has taken samples to determine the cause of death.

The EPA advised that local council and water corporations could not contain much of the water from leaving the site of the fire, but efforts are now being made to divert the contaminated water into the sewer system, and to minimise runoff into local waterways.

The EPA said that they will be requiring SKM to develop a management plan for water at the recycling site during the recovery and clean up phase after the fire.

Peculiar how the Western Ring Road is not affected but the whole Upfield train line is stopped. #Coolaroo #Melbourne #vicfires #metrotrains pic.twitter.com/lycmycnxbB

Informed by experience of Morwell community during #Hazelwood Mine Fire, health assessments offered to community at #Coolaroo #gippsnews

Lots was done & lessons learnt being applied in response to #coolaroo. Couple of examples https://t.co/ls1xYbt2BV https://t.co/ShimHKRFcM

#MFB drone footage shows the extent of firefighting efforts at the #Coolaroo blaze. Fireys are still putting out hotspots. Well done to all. pic.twitter.com/KSmeVtAnQz

Our investigation into the #Coolaroo fire is underway to see if any offences under the Env Protection Act. I can't comment further

@MFB_NEWS were called nine times in five years to the factory in #Coolaroo that is at the centre of a toxic fire https://t.co/YK6NJSHpKR pic.twitter.com/1pid2Fm3vn

My photo picked up in this story: Fish dying in waterways near burning #Coolaroo recycling plant https://t.co/hohiqx3S75 via @ABCNews

2 responses to “Wash up from the Coolaroo fire: class action and pollution of Merlynston Creek”