Residents of Fawkner gathered on Sunday for a public meeting to discuss the toxic legacy site at 100 and 102 McBryde street and the surrounds. The meeting was held at Fawkner Public School, kindly provided by the school principal.

A development application to erect warehouses at 102 McBryde street is currently before Moreland Council Urban Planning Committee. A Council Officer proposed motion was given to Councillors an hour before the last Urban Planning Committee meeting. As this is a contentious issue Councillors voted to defer a decision on this application to September.

Toxic Free Fawkner argue that council officers are relying heavily on advice from the EPA. However, the EPA is relying on a non-statutory environmental audit from over 20 years ago and very limited recent surface water testing from behind the site and in Merri Creek.

“The site has NOT been thoroughly tested since 1995. The footpath, which the developer wants to use to build a long trench to connect the sewerage, has NEVER been tested before. Wouldn’t you want a site with this history to be fully tested before granting a planning permit?” argues Toxic Free Fawkner in a Facebook post.

The meeting heard from a lawyer from Environment Justice Australia regarding the importance of environmental justice and community engagement with resolving the long term issues around this toxic site.

Federal MP for Wills Peter Khalil also attended and offered his support in whatever way possible to the community in working towards a resolution.

It was noted that Frank Maguire, our state MP for Broadmeadows which covers Fawkner, failed to acknowledge the invite or attend the meeting. Cr Abboud appealed for Peter Khalil for assistance in getting Frank Maguire to pay attention to the local community of Fawkner, especially around the toxic site on McBryde street.

After the meeting concluded, residents marched the 400 metres from the primary school down McBryde street to the gates outside 102 McBryde street. Many carried signs to make Fawkner safe and not to dig up Fawkner’s toxic past. One resident dashed inside her house to bring back a piano accordian to provide music for the protest.

On the footpath outside 102 McBryde street, residents lined up along the fence. This verge has never been tested or remediated, yet the property owner plans to put a trench along this verge and into the property for sewerage.

Similarly, the parkland behind the property that runs down to Merri Creek where NuFarm used an open drain to wash chemicals into the creek, has never been adequately tested or remediated with a clay cap.

After the protest I walked around to the back of the site. A south wind was blowing. If the contaminated soil at 100 or 102 McBryde street was exposed, the fumes would blow north towards Hood Street and over 104B McBryde Street property where a subdivision for 24 residential properties is being planned. (See Planning Alerts website for this development)

Local resident Selina Page is one of the objectors to this development and described in her objection the barren nature of the parkland behind the site:

For many years I have been a regular user of the creek reserve area in Fawkner located directly behind the former Nufarm site. I always wondered why it was so barren. The past existence of the Nufarm factory and its toxic legacy is something I discovered purely by chance, from a casual conversation with another dog-walker and long-term local resident. This contaminated site and its broader health and environmental impact has been a well-kept official secret for a long time. There are very strong grounds for the concerns of local residents about any potential residential development in this vicinity and it is long past time for these concerns to be taken seriously. Planning approval for rezoning of 104b McBryde St Fawkner should be withheld pending a fully independent and properly scoped environmental audit of 100 and 102 McBryde St.

In 2006 the owner of 102 McBryde Street is alleged to have made illegal excavations and moved contaminated soil first to the back of factories, and then to the parkland near Hood Street. There has been a lack of follow up and testing for soil contamination at 104B McBryde street.

Here is the social media from the meeting and protest:

I'm at the #toxicfreeFawkner meeting discussing the old NuFarm toxic site and the inability of #springst to resolve pic.twitter.com/ASgU3odoJ2

Sally Beatty: we know now dioxins below clay cap is at similar levels to 1990s, according to a recent drill hole #toxicfreeFawkner

Roma has lived in #Fawkner since 1957: emissions were obnoxious, caused breathing difficulties, many families had cancers #toxicfreeFawkner

Resident highlights much of toxins stored at back of site, open drain to Merri Creek, Not remediated in 1995 #toxicfreeFawkner

Some of land backing on Merri Creek at 104B McBryde St planned for housing on toxic soil #toxicfreeFawkner. We Need full environment audit

Brian Snowden: to toxic site owners, we don't want to exclude you, we have the same problem, needs fixing once & for all #toxicfreeFawkner

owner of 102 McBryde did illegal excavation in 2006, dumped toxic soil behind factories at 106, then moved it to Hood St #toxicfreeFawkner

Since Monsanto subsidiary NuFarm closed #Fawkner toxic factory in 1974, this has been unresolved problem @EPA_Victoria #toxicfreeFawkner 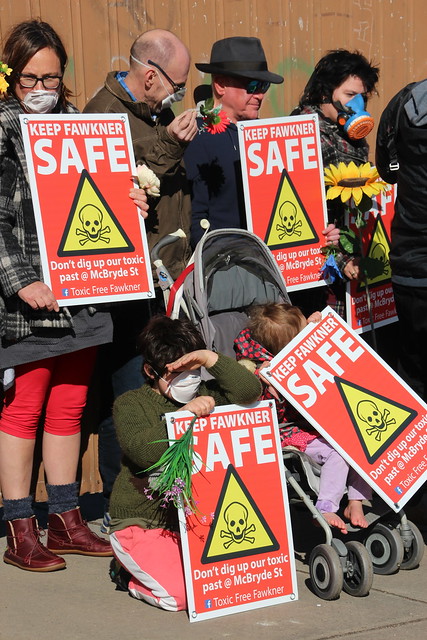