Passengers forced to help themselves ‘Detrain’ on the Upfield Line

I got to experience a broken down train and the community response in helping each other off the Upfield train yesterday.

Because of level crossing removal work at Camp Road trains are only running to COBURG on the Upfield Line. Yesterday I cycled to COBURG and used the Parkiteer cage for my bike and caught the train into the city for an event. Everything was well, and I caught the 5:02 train from Flinders Street.

The problem with my train started occurring after Flemington Bridge station with the train motor seeming to sputter causing jumps. We made it past Royal Park before the engine pretty well died in fits and starts. “You can do it, you can do it” chanted someone in my carriage as the train inched forward in a few splutters of progress.

The shared experience of being stuck on the train did open up conversations between strangers, even sharing photos of pets and individual situations. We developed a little bit of community breaking out of the normal isolation bubbles of a peak hour rail journey.

We had the driver make a number of trips through the length of the train, all really to no avail. The train behind caught up but was of no assistance. We spent over an hour waiting on the dead train. The announcements by the PTC were distinctly unhelpful. One of the announcements referred us to the PTC website for updates, which was problematic as we were in a railway cutting with extremely poor mobile reception, if any.

Eventually a couple of young dudes over ride the door in my carriage and climbed down. Then followed an exodus of passengers helping each other off. The driver went down to the middle of the train and used a step ladder to assist passengers. There appeared to be no emergency PTC response crew, and the PTC appeared to lack any planning for this scenario. I had to laugh when I saw the tweet eventually from the PTC telling us not to disembark, when passengers were already helping each other to do so, while there was no sign of PTC response crew in the scene.

Respect to the train driver who did the best he could in a situation not of his making.

After exiting the train people walked to Park St and many to Sydney Rd to catch the parallel tram service, which of course was packed to the rafters. It was a long day with an electrical thunderstorm about to hit just as I reached Coburg to collect my bicycle.

The PTC don’t allow cycles on the replacement bus to Upfield, so I found a friends house to hunker down until the storm had passed.

Of course what marked this event was passengers breaking out of their isolation and talking to each other, then helping each other to climb off the train. We shared for a moment a bond of community in adversity.

But the event raises issues about PTC emergency response to situations like this. Metro Trains appeared to be floundering. I also wonder how much privatisation of our urban public transit systems has cut back maintenance schedules allowing such a breakdown to occur.

Heaps of money going into new multi-billion road projects, while we have one major rail project proceeding: the Metro link. Other new rail projects remain a promise in the never never. Airport rail link? Maybe in 10 years. Still waiting for Doncaster rail or Rowville extension, and of course making Upfield Line dual track from Gowrie to Upfield (and eventual extension and electrification to Craigieburn and Wallan) which would increase capacity and frequency on this line.

This is a slightly reworded version from my Facebook report 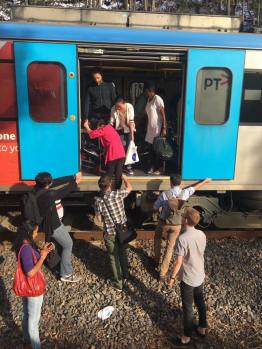 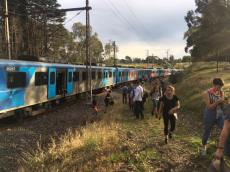 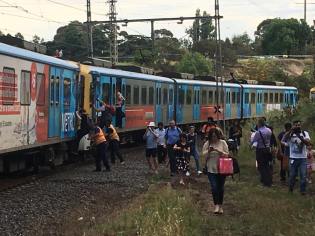