Fawkner residents rely on the Upfield train line as the primary public transport link into the city.

Residents and others from up and down the Upfield line attended a rally on Saturday in Bonwick Street to push for more trains, track duplication and upgrade of the Upfield line. See full report (including speeches) at the Upfield Transport Alliance: Duplicate the Upfield Line needs to be a priority says Fawkner Rally.

While residents at the very south of our suburb can walk to the Bakers Road tram terminus to catch the number 19 tram down Sydney Road, for most Fawkner residents this is simply not an option. (Sustainable Fawkner supports extending the No 19 tram all the way to Campbellfield)

The bus service that winds it’s way through Fawkner streets linking Coburg to Campbellfield is necessary and important, but also lacks the speed and frequency for city commuters.

But it’s not only service frequency that’s a problem, it’s the reliability of the service.

When any problem happens on the line and there is a major delay in the Upfield timetable trains are short shunted at Coburg station. While residents in Coburg and Brunswick might not notice much change, all the residents at Batman station and further north have to wait for up to 40 minutes or longer for a train. This makes people late for work, late for important appointments.

We have known for 5 years that Upgrade of the Upfield line is urgently needed. The work is in the Melbourne Rail Network development Plan published in 2012, but listed as not to be done for at least 15 years.

A $5 million dollar report on upgrading the Upfield line and extension to Craigieburn along the Somerton link was completed last year, but the government is refusing to make this report public. See the ministerial response in the article on the Extend the Upfield Bike Path campaign website.

Five years ago Metro Trains urged urgent track duplication of the Upfield line. This has been ignored by the Andrews state government.

Track duplication should be done as a priority project in conjunction with level crossing removal in Coburg that will likely start later this year, to minimise disruption to passengers.

Have a read of this January 2014 Age report by Adam Carey: Single line to Upfield worsens north-west rail woes

A four-kilometre section of single track railway in a sparsely populated part of Melbourne is causing transport problems all over the north-western suburbs, Metro says.

The Upfield railway line, one of Melbourne’s quietest, goes from two tracks to one at the end of the line between Gowrie and Upfield stations.

The single track section can only accommodate one train at a time, creating a bottleneck that has long condemned Upfield line passengers to 20-minute waits between trains, even as several other lines in Melbourne move towards 10-minute frequency.

Metro has called for the single-track section of the Upfield line to be duplicated by 2017, arguing that services on the line should be increased “towards a 10-minute frequency”.

In a proposal to the state government, Melbourne’s rail operator says the single track should be duplicated because it also puts pressure on the Craigieburn and Sunbury lines, two of Melbourne’s busiest and most prone to peak-hour overcrowding, because all three lines are linked in a northern group.” Read more

It’s way past time that Lizzie Blandthorn MP and Frank McGuire MP take up the issue of urgent upgrade to the Upfield Line. Residents of the northern suburbs are sick of being ignored. 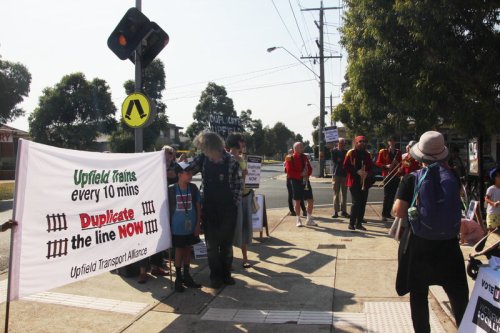 The Fawkner rally to Upgrade Upfieldline