The need for Track Duplication between Gowrie and Upfield 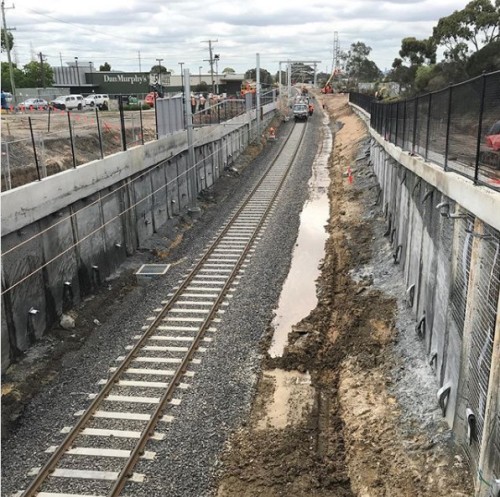 Is there room for a 2nd track and bikepath? Camp Rd Level Crossing Removal. Photo: Kevin Balaam via Instagram

As more people move into Fawkner, indeed into Moreland and Hume muncipalities and along the suburbs served by the Upfield rail line, it becomes more imperative to upgrade the Upfield line.

The Level Crossing Removal at Camp Road will not do anything to improve the service to commuters on the Upfield line. This work has been done for improved traffic flow only. The benefit to public transport users will only come with adding dual track from Gowrie to Upfield, which would allow for an increase in service frequency and reduce a bottlenecks in the public transport line infrastructure.

Yes, there are other bottlenecks in the system such as the city loop, which the Metro tunnel line will help resolve.

So why isn’t the Andrews government and State Labor MP Frank Maguire pushing harder for upgrading the Upfield Line to dual track?

The following interchange in letters between Denis Watson of the Upgrade Upfield Committee and Frank Maguire’s office highlights the issue:
END_OF_DOCUMENT_TOKEN_TO_BE_REPLACED 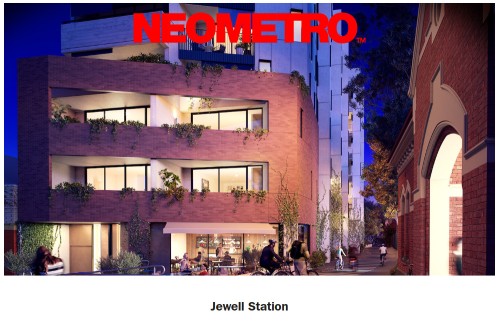 Artist impression: NeoMetro development to close Upfield path for 2 years from Oct 2017 to 2019

Sometimes issues in other parts of the municipality affect Fawkner residents, as well as residents of other suburbs. If you are a cyclist and use the Upfield path to commute into the city past Jewell Station this will directly affect you.

An apartment development in Brunswick next to Jewell station will close the Upfield Path for over two years.

I have checked out the NeoMetro website and the development has lots of ‘sustainable’ features including a rooftop garden and emphasises city living , and appears to emphasise pro-cycling living.

Why then does the development close down one of the major cycling arterials in the City of Moreland? And not just for a few days, or a week or two, but for two whole years?

There is something hypocritical in a supposedly pro-cycling development that closes one of the major cycling arterials in our city for two years or more.

My next major thought was how the hell did this development proposal entailing closing the Upfield Path for two years get through Moreland Council? Well, Councillors?
END_OF_DOCUMENT_TOKEN_TO_BE_REPLACED 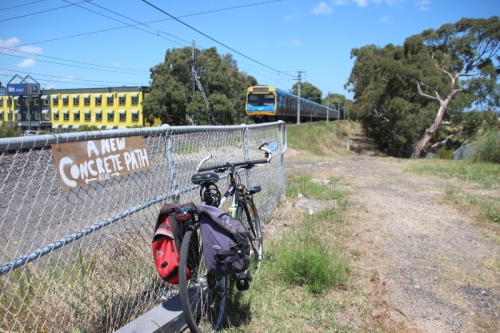 Someone with a sense of sign humour at railway bridge

Arising from letters I sent in August, I have had a response from a policy advisor from the office of the Minister for Roads, Luke Donnellan dated 18 August 2017 regarding the Upfield Bike Path extension, and it’s not good. There are no plans by VicRoads to extend the Upfield bike path past the M80 ring road, this is despite the dangerous nature of Sydney Road for cyclists through Campbellfield. 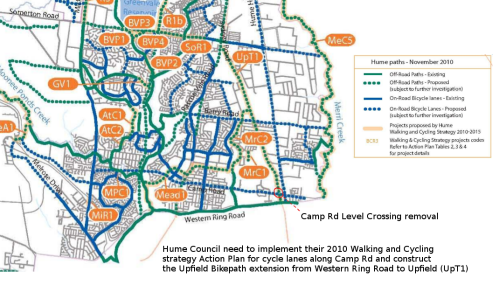 The Upfield bike path, a shared use path that thousands of cyclists and pedestrians use every day, strangely doesn’t go all the way to Upfield. In fact it doesn’t exist, except as a poor dirt track in places beside the railway line, within Hume municipality. But Hume Council is now on board to make this path happen. Will the Labor State Government come to the party?

Extending the path up to Barry Road and Upfield station during the Camp Road level crossing removal would make a great deal of sense, opening up to many Hume municipality residents and cyclists a safe route to Brunswick, Coburg and the Melbourne CBD.
END_OF_DOCUMENT_TOKEN_TO_BE_REPLACED

Posted on February 6, 2017 by John Englart | Leave a comment

The State Government announced $1.7 million upgrade to develop visitor infrastructure, including 6km of new bike and walking paths, at Merri Creek Park in Campbellfield. But we are still to see any commitment to build important bicycle shared use paths in Campbellfield: the extension of Merri Creek Trail and Extension of the Upfield bike path to Barry Road at Upfield.

The Money for the Merri Creek Park facilities comes from the Growth Areas Infrastructure Contribution (GAIC) fund. The 6 km of new paths will improve some community access to the 650 hectare green space in Campbellfield, which hosts nationally significant native grasslands. It is a real pity there is no public commitment from state MPs to fund the missing links that would help connect the park and local residential suburbs.

Delighted with $1.7 million upgrade to Merri Creek Park including 6km of bike and walking paths in Broadmeadows. pic.twitter.com/hLZG2ZRuiX

END_OF_DOCUMENT_TOKEN_TO_BE_REPLACED 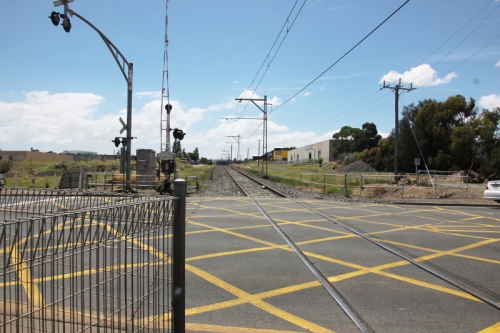 Today I went on a scouting trip along the Upfield railway line to Camp Road, the site of a level crossing removal to start in the later part of 2017 and be completed by 2019.

I have come to the conclusion:

The Upgrade of the Camp Road level crossing needs to include either a tunnel for cyclists as part of the railway in trench design, or pedestrian lights to allow cyclists to cross Camp Road in safety.

The consultation and community engagement is at The Meadows Greyhound Racing track.

END_OF_DOCUMENT_TOKEN_TO_BE_REPLACED

Upfield Bike path: shared use upgrade to cemetery footpath does not go far enough for cyclists 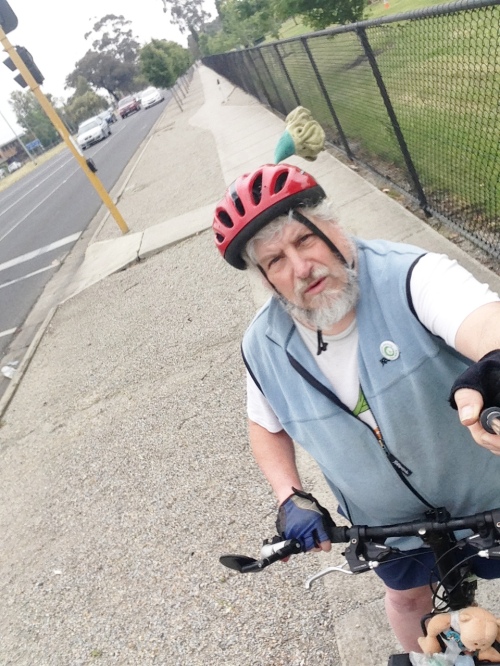 This footpath from Lynch Rd will be shared use

One of the anomalies facing cyclists accessing the Upfield Bike Path from central Fawkner was either using Sydney Road in a 70km zone or riding on the footpath next to the cemetery, an illegal act unless accompanying children.

Sustainable Fawkner suggested and lobbied candidates as a quick fix the footpath next to the cemetery from Box Forest Rd to the police station should be made a shared use path. (see End of Post)

We have just heard from our new Councillor Ali Irfanli (Facebook) that the footpath along Sydney Rd near the cemetery will be re-designated a shared path between Lorne St and Lynch Rd.

It will be signposted as such in the next 4 – 6 weeks. The costs of these works has been assessed as minor and is managed within the existing Council budget.

While we appreciate this change, it does not go nearly far enough to resolving an anomalous legal and safety issue for Fawkner cyclists.
END_OF_DOCUMENT_TOKEN_TO_BE_REPLACED 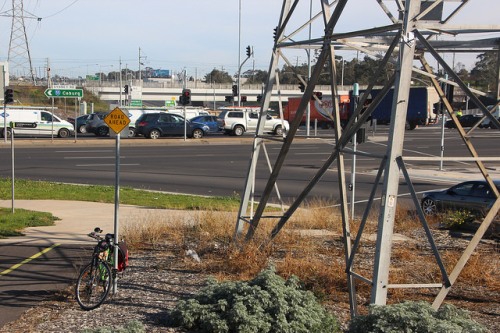 I understand the the Victorian Government has brought forward 11 level crossing removals, two of which – Buckley Street in Essendon and Camp Road in Campbellfield – will be fast-tracked with work commencing next year and complete by 2019.

Camp Rd railway level crossing is just 300 metres along the road from the Campbellfield shopping centre. It is this Level Crossing upgrade which concerns me the most here.

The 11 level crossings have been split into two packages with both now out to tender, according to this report in Urban Melbourne. My check of the Level Crossings removal website shows the Upfield line crossing removals as at 27 September, 2016 are currently under tender.

The “North Western” package has five sites. As well as the two fast-tracked projects, the package includes Glenroy Road in Glenroy, Bell Street in Coburg and Moreland Road in Brunswick.

The Upfield shared bike path parallels the Upfield railway line. It provides a relatively safe off-street bike path running down the spine of the municipality of Moreland. It connects people in Moreland with local schools, shops and businesses, and links with the Capital City trail in the south and routes into the Melbourne CBD.

But the problem in the north is the gap connecting shared bike paths: the Upfield path stops at Box Forest Road and does not connect to the Western Ring Road Path that borders the northern boundary of the municipality.

For those Fawkner residents wanting to shop by bicycle at Campbellfield there are presently two options: attempting to brave the horror of the Sydney Rd and Western Ring Road intersection, or the pedestrian bridge over the Western Ring Road a 100 metres east of this intersection. If you take the Pedestrian bridge, then once across Mahoney’s Rd at the Pedestrian lights there is a problem of lack of a path to cycle to the Campbellfield Plaza.

Upgrading level crossings at Moreland Road, Bell Street and Camp Road is an opportunity to also clear bottlenecks and give priority to the increase in cycling in the municipality.

I believe the Munro Street crossing may be included when the Bell Street Crossing is upgraded. (This needs to be verified)

Extending the Upfield shared Bike path could connect with a path to the Campbellfield shops providing a safe route to cycle north for people from Hadfield and Fawkner and further afield.

The railway bridge across the Western Ring Road was built with a capacity to take a second railway line and also with enough space for a shared path to extend the Upfield Bike path further north.

But it is imperative that level crossing removal at Camp Street should also include works incorporating a cycle crossing.

Now is also the time the State Government should join City of Moreland and City of Hume in extending the Upfield shared bike path at least up to Camp road with a vision of extending it further north and incorporate a short path to the Campbellfield shopping plaza.

Providing off-road cycling facilities is a sure way to get more people cycling more often. It makes our communities more sustainable, and more climate friendly, while providing health benefits to individuals and society as a whole.

Outer suburbs like Fawkner, Hadfield and Campbellfield need cycle friendly infrastructure just as much as inner suburbs. Indeed, because there is more of a culture built around roads and the car, it can be argued more cycling infrastructure might be needed in these suburbs to get people transitioning to lower emission transport and to change transport behaviours.

There are other problems for cyclists from Fawkner, especially in the northern end around Anderson Rd, in finding a safe route to access the existing Upfield Path. These perhaps need to be considered in depth at Council and Vicroads level for resolution. For middle Fawkner the footpath on the western side of Sydney Rd next to the cenetery really needs to be declared a shared path, as Sydney Road has a speed limit of 70km per hour and is unsafe to cycle on, to access the Upfield path. 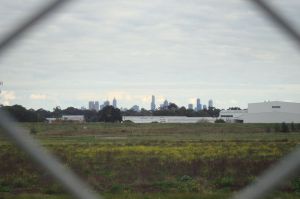 Spring onto your bike for Ride to work Day 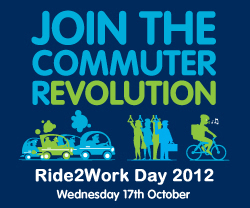 Wednesday 17 October 2012 is Ride to work Day with thousands of people taking to their bicycles, tricycles and even unicycles to get to work, school or university. If your driving to work tomorrow, please take care, as always, of cyclists and welcome if this is your first Ride to Work Day as a cyclist.

Fawkner is safer than many other suburbs for cycling within the suburb with no major through roads and lots of quiet residential streets and the Upfield Bike Path, Merri Creek Bike Path and the Western Ring Road Path which all border the suburb.

For Ride2Work Day Moreland City Council have organised a community breakfast in Victoria Mall, outside Coburg Library, Coburg between 7.00am and 9.00am. Enjoy a healthy breakfast to help you on your way to work. Some of us will be riding down the Upfield Bike Path from Box Forrest Rd to enjoy the community breakfast before heading off to work or school.
END_OF_DOCUMENT_TOKEN_TO_BE_REPLACED