On the Cemetery Kangaroos and Moreland Council Biodiversity strategy

When I started raising concerns about the Kangaroos in Northern memorial Park, I thought this was a fairly simple issue about their welfare in the face of cemetery development.

After a meeting with Cemetery staff I am now reassured about their continuing welfare.

But as I made wider enquiries I discovered further issues with regard to Moreland Council’s lack of action in developing a Biodiversity Strategy.

END_OF_DOCUMENT_TOKEN_TO_BE_REPLACED 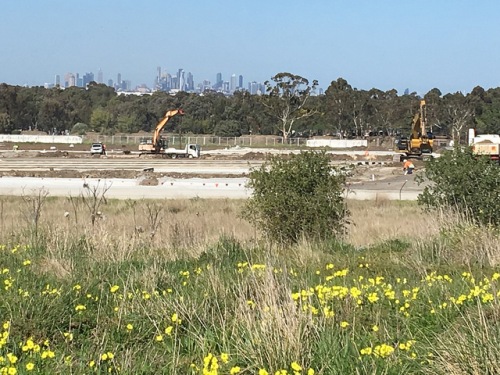 Over several years I have watched the mob of kangaroos within the Northern Memorial Park. Usually I see them from the Western Ring Road trail, but occasionally when I venture in to the cemetery, they can sometimes be seen among the native grasslands from the northern graves section.

But the cemetery is expanding, and new grave sites are being opened up on the north western area of the Northern Memorial Park. The area of native grasslands is shrinking.

On a cycle ride along the Western Ring road on July 17 I counted at least 18 Eastern Grey Kangaroos. This is perhaps the last mob of kangaroos permanently living within the bounds of the Municipality of Moreland. I think they are worthwhile to conserve and maintain in our municipality.

A little bit of kangaroo wildness in our rapidly urban consolidating municipality.
END_OF_DOCUMENT_TOKEN_TO_BE_REPLACED