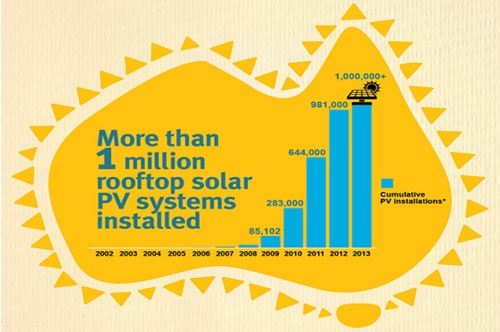 In my travels around the internet I found this site put together by the Australian PV Institute showing the level of installation of solar photovoltaic panel installation by postcode or Local Government area.

In Fawkner there have been about 246 solar PV installations. This amounts to approximately 5.4% of the estimated 4520 dwellings in our suburb with an installed capacity of 571kW.

This is lower than the Moreland average of 6.1%. Moreland Local Government Area (LGA) and is also below other municipal areas in Melbourne’s north. Maribyrnong has 7% solar installation, Moonee Valley is on 6.5%, Darebin is on 6.9%, Banyule on 6.7%, Whittlesea on 9.7%, and Hume on 11%.

I made up this table to show the relative level of installation of solar panels across Moreland:

There is a substantial opportunity to increase residential rollout of solar PV panels in Fawkner and in Melbourne’s north to keep the pressure on reducing carbon emissions. Solar panels reduce peak demand on base load power stations. This is particularly important in Victoria where we have some of the most polluting power stations which burn carbon intensive brown coal.

On a global level, Italy (16%) & Germany (32%) accounted for almost half of global solar PV capacity installed up to 2012, according to The Climate Group (@ClimateGroup) in a tweet.

Moreland Council has installed solar panels on Council buildings and currently purchases 100% Green power, with an aggressive energy efficiency campaign to reduce Council energy usage. Think about all the street lights which Moreland has been changing over to the much more efficient and long lasting LED lights. Through buying carbon offsets – an accredited program financing wind power generation in India – it has achieved carbon neutrality this year. This is a positive step, although Council needs to continue to reduce energy and carbon emissions to reduce the level of carbon offsets purchased.

Moreland Council are also presently preparing a climate action plan 2020 in conjunction with the Moreland Energy Foundation with an aim to make the municipality – that’s all of us – carbon neutral by 2020.

If you need assistance with reducing your energy usage MEFL’s Positive Charge can assist with advice, assessment and products.

One of the last major reports of the Climate Commission before it was abolished by the new Abbott Government was The Critical Decade: Australia’s future – solar energy (PDF). It was written by Professor Tim Flannery and Professor Veena Sahajwalla. The report highlighted that ordinary Australian households were leading an energy revolution with more than one million rooftop solar PV systems installed by May 2013 in just a few years.

Climate scientists continue to say this is the critical decade for climate action. With the Abbott Government attempting to dismantle the effective but limited policies of the former Labor Government, and obstructing international climate negotiations in Warsaw, it is time for individuals, businesses to step up to taking action.

The current conservative Victorian Government lead by Premier Denis Napthine has backtracked on it’s bipartisan support for climate action and rollout of solar power of the previous State Labor Government and is currently considering 13 billion tonnes of brown coal allocation to develop a coal export industry.

We need to keep holding our State and Federal Governments accountable to Australian public opinion on action on climate change and carbon pricing.