Is it time to extend West Coburg Tram route 58 to Hadfield?

Ever wondered why the West Coburg tram terminates at Melville Road and Bell Street intersection? This article in the Argus in 1944 explains that housing commission building needed to be kept within half a mile of the terminus, or the tram line should be extended up Turner and Derby streets.
END_OF_DOCUMENT_TOKEN_TO_BE_REPLACED 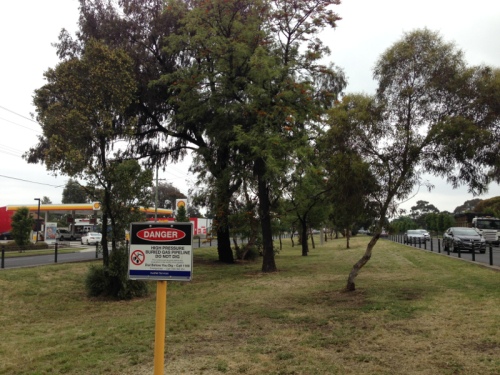 Moreland Council have announced a Survey on extending Sydney Road tram through Fawkner. This is gratifying to see, although it is just the first step in a campaign to have the No 19 Sydney Road tram service extended past it’s present Bakers Road, North Coburg terminus.

In November 2014 we argued it was time to Extend Route 19 tram to Fawkner and Campbellfield. There is a strong argument that the tramline should be extended to the Campbellfield shops, and build a public transport interchange linking the tram terminus with the Upfield train line (which also needs upgrading to dual track and electrification to Craigieburn) and east west bus routes along Mahoney’s Rd/Camp Road. (Bus interconnect includes: 902 – Chelsea – Airport West SMARTBUS Service, 530 Campbellfield – Coburg via Fawkner, 531 – Upfield – North Coburg via Somerset Estate, 538 Somerset Estate Broadmeadows via Camp Rd)

This would add substantial amenity to residents in Fawkner and Hadfield in accessing a range of shopping centres, including the Campbellfield shops. It would also add amenity to the various motels along Sydney road in Fawkner, encouraging their patrons to leave their cars parked and travel through Moreland by tram and train.
END_OF_DOCUMENT_TOKEN_TO_BE_REPLACED

Time to Extend Route 19 tram to Fawkner and Campbellfield #vicvotes

Extending the No 19 tramline to Gowrie Station in Fawkner has been proposed by the Greens this election. It is part of an initiative to fill missing tram links amounting to an extra 56 kilometres around Melbourne at a cost of about $840 million.

Rather than trams terminating midway between focal points, it is suggested they be extended to meet train stations or shopping centres to improve their functionality and intermodal usefulness.

The proposal for adding a number of tram extensions to the network is not new. The Public Transport Users Association have had plans for several years which they continue urging policymakers to adopt. The Greens proposal for 17 tram line extensions totalling an extra 56 kms was initially unveiled in July 2014.

The Greens also advocate the purchase of another 50 locally built E-Class trams to also alleviate some of the pressure on Melbourne overcrowded trams, especially in the northern suburbs. The Greens cost the extensions at about $15 million per kilometre as against the cost of $1 billion per kilometre for East West Link. Some have raised ‘Can the Greens tram plan be taken seriously?‘ (Alan Davies, Crikey) yet public transport commentator Daniel Bowen argues that Tram extensions: Not as expensive as some claim.

@danielbowen "DTF notes that efficiencies in the packaging and procurement works may reduce the (cost)" Yeah I reckon cheaper by the dozen.

Other than the Route 19 tram, the Route 112 tram extension along Gilbert Road to Edwardes Lake Park, then up Edwardes street to terminate at Reservoir Station also makes a lot of sense to me enhancing intermodal connections. The other routes I’ll leave to others to discuss the merits of.

You can read the Greens tram initiative, routes and maps yourself.

What I want to talk about further is extending the No 19 tramline to, and perhaps past, Fawkner.

The Greens proposal for Route 19 involves extending the tram track up the middle of Sydney Rd to Fawkner Shops (via Gowrie Station). The map seems to indicate it would terminate in the centre of the road near Gowrie Station rather than actually connect to the Fawkner shops in Bonwick street. Taking the tram tracks down Jukes Rd might be a little problematic.

I would not stop this extension at Gowrie but continue it further across the Western Ring Road and Mahoneys Rd to the Campbellfield shopping centre precinct. This makes enormous sense and provides better public transport and pedestrian access from Fawkner to the Campbellfield shops and avoids the morass of bitumen and cars on the Sydney Road intersections with Western Ring Road and Mahoneys Road (a real nightmare when on foot)

That strip of Sydney Road in Fawkner also features several motels catering to visitors to Melbourne, including the Meadow Inn Hotel-Motel, Hume Villa Motor Inn, Ibis Budget Fawkner, and the Fawkner Star Motel. A tram line on Sydney Road would encourage those visitors to leave their cars in motel car parks to catch the tram to Coburg, Brunswick or even into the city or to the Campbellfield shopping Centre.

The population of Fawkner and Hadfield are also increasing with more medium density sub-development so the tram extension would also cater to this population growth.

The railway Stations of Gowrie and Fawkner provide a wide catchment, with many people driving and a few cycling to these stations to commute to work.

The Upfield rail line is already operating at near capacity during peak periods with an increased frequency on this rail line overdue. There is a case for duplication of the track to Craigieburn and electrification from Upfield to Craigieburn to close a loop and enable more freqent service.

Greens candidate for Brunswick Tim Read suggested at the Moreland Transport forum that the duplication of the Upfield line past Gowrie and possible electrification of the existing track to Craigieburn would close a transport loop to Craigieburn and allow greater capacity and frequency of services on the Upfield Line. He was the only candidate at this forum to raise this potential.

The extension of the Sydney Road tram to Campbellfield would make a real difference in alleviating pressure on the capacity of the rail service to meet peak demand, while increasing public transport patronage.

Trams are especially efficient for smaller journeys and this tramline extension would help connect those living in Fawkner and Hadfield to other urban focal points in Campbellfield, Coburg and Brunswick.

The tram extension to Campbellfield would also be a useful intermodal connection to the proposed Melbourne North station at Campbellfield on the preferred High Speed Railway alignment that uses the Upfield rail alignment (underground from Gowrie to Southern Cross). (See High Speed Rail – Department of Infrastructure and Regional Development – Chapter 4 on Alignment and station locations)

There are those who say this tramline duplicates the Upfield rail service, yet both services are popular and well used. It is likely any extension would increase public transport patronage.

The Northern suburbs of Moreland could sure do with a little bit more public transport infrastructure.